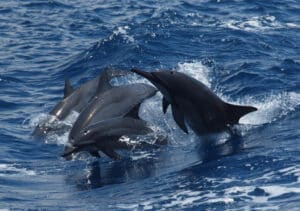 Hawaii is a special place to observe dolphins in their natural surroundings.  “Nai’a” is the Hawaiian name for dolphins. It refers to any species of dolphins found in the Hawaiian waters, which can mean one of the following four:  Pacific Bottlenose dolphin, Rough-toothed dolphin., Spotted dolphin and Spinner dolphin. Of these, Spinner dolphins are the smallest and most common dolphins seen around Hawaii. 700 – 1000 Spinner dolphins call the Big Island waters their home.

As implied by their name, Spinner Dolphins exhibit amazing flips and spins in the air, putting on a great show for everyone! The female Spinner dolphin is about 5 feet long and 150 pounds.  The male Spinner is bigger, and can weigh up to 170 pounds.  Infant dolphins, or calves, can be seen throughout the year because there is no specific birthing season.

Athough Spinner dolphins can be seen along the Kona Coast and on the Hilo side of the Big Island, some of the best places to view dolphins up close include areas of South Kona, Kealakekua Bay in particular, which is only 300 feet from Dolphin Bay House! It is the most popular destination for dolphin sightings since it is a marine conservation area known for its calm conditions and crystal-clear waters. 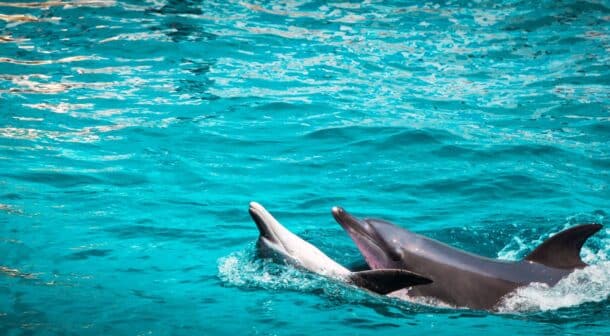