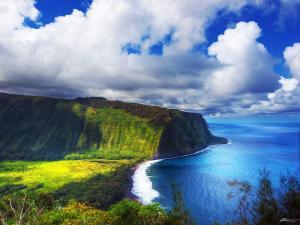 Waipiʻo Valley is located in the Hamakua District. It was the capital and permanent residence of many early Hawaiian aliʻi (kings) up until the time of King ʻUmi. Known as the Valley of the Gods, this  lush valley is home to ancient sacred temples, tropical rainforests, waterfalls and tall sea cliffs. Few places on the island can match the mystical beauty of Waipi’o.

Waipi’o valley is stunning, and even if you do not manage to go down, the views from the overlook are dramatic and breathtaking.

Access to the beautiful black sands of Waipi’o Beach is difficult, as the road to the valley is narrow and steep. It hugs the cliff as it descends 1000 feet, and even though it is paved, you’ll need a four-wheel drive vehicle to navigate it. You may want to consider walking it instead of driving because once you’re on your way in your car, it is impossible to turn around if you change your mind! The road begins at the Waipi’o Valley Lookout.

It is a good idea to take a guided tour into Waipi’o Valley so you are taken to the best spots and don’t have to worry about trespassing into private or sacred areas. We hope you’ll include a visit to the Valley of the Gods during your stay at Dolphin Bay House!